I’ve slept some very strange places in my day. I slept on the floor of a tour bus for a few months, airports the world over, lean-tos, and even a VW van at a youth hostel. But the worst, or maybe best if you’re searching the annals of your life for new blog material, is the time I built my own shelter out of sticks.

It was an overnight camping trip from my summer camp in Maine that I signed up for specially. In camp we stayed in nice cabins with toilets and showers and all the fancy things in life. But this overnight trip was going to be roughing it. Real hiking, building your own shelter to sleep in, and cooking over a campfire. Out of the whole camp only two girls signed up, but I was super stoked to prove that I was just as outdoorsy as any of those boys.

We left camp in a rickety, fifteen-passenger van that was probably not safe for children to be in and drove out to the wilderness. We found a place to pull off the road and hiked around a bit. I don’t think we were really supposed to be where we were. There we no markers for trails or a sign saying we could camp there. I think we were illegally squatting on someone’s land and the camp hadn’t cared enough to ask the counselors where they were taking us before we left camp.

Once we found our less-than-legal home for the night, the head counselor started teaching us how to build our emergency shelters. You had to use a big stick to make the top, lay smaller sticks against it to make the sides, and finally pack it in with leaves for insulation. A decent concept in an area where there are no deadly bugs or snakes that might have wanted those snuggly warm leaves for their own evening shelter.

Of course, all the boys immediately started going on and on about how that would be the girls’ tent ‘cause the two of us wouldn’t be able to make it through the night in our shelters.

That’s when it started to rain. END_OF_DOCUMENT_TOKEN_TO_BE_REPLACED

It’s the Denali apocalypse! No, really, I think it truly might be!

I went hiking in Denali National Park on Wednesday, and we summited Mount Margaret. It was glorious! Most hikes around here you spend hours busting your butt to climb to the top of something, which really turns out to be a sketchy ridge that’s overrun with bugs. You stay long enough to take a triumphant picture and get a cliff bar out of your pack, then skirt your butt back down the mountain before you’re eaten alive or fall to your death. 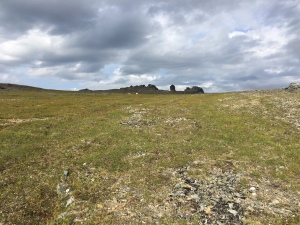 But on top of Margaret was a beautiful field! There were neat rock formations, Dall sheep, ptarmigan, and ice that never thaws.

We walked through flowers, found a cave. It was fantastic. Then we crossed the ridge line, frolicking through the field to hike down the other side of the mountain. I looked back and saw something funny off in the distance. At first, I thought it was a part of the outline of Mount McKinley (Denali), which is often covered in clouds. But then I looked back a minute later, and it had moved.

“Hey, that cloud looks like a tornado!” I said, pointing at the pretty thing. Luckily, I was with two people from Tennessee, who both immediately recognized it as a funnel cloud! A funnel cloud in the middle of Denali, touching a mountain ridge in the distance. And it was like a really, really far way away, so naturally, I sat down and had a snack while watching the cloud until it disappeared.

Then I stood up, saying what a neat hike it was. Then thunder shook everything. So the nice walk on the mountain became a game of get off the mountain as quickly as possible pretty darn quick. It involved bushwhacking and a lot of rain. My face bled a little, but we made it to the bus out of the park. We got on the bus, and an emergency radio call came in.

There had been a landslide on park road. Now, for those of you who don’t know, there is only one ninety-two-mile-long road that goes into Denali park. It that road is blocked, it’s either a helicopter or walking to get out of the park.

Luckily, we were far away from the landslide and really close to the park entrance, so our bus was unaffected. But still, I’ll give it a modest estimate that hundreds of park visitors were stuck on the far side of the landslide. I would have hated to be one of their bus drivers, trying to entertain bored tourists, but I’m sure everyone was fine.

I thought the strangeness in Denali was over until I woke up Thursday morning to smoke everywhere. There was a fire on the other side of the park entrance from us. You couldn’t see anything outside. At this point, we are just some raining frogs away from the end of Denali as we know it, people.

Be afraid. Be very afraid.