Filed under: I Meant Well — meganorussell @ 11:30 am
Tags: Are Writers the Bad Guys?, Girl of Glass, Notting Hill Meme, Protecting the Protagonist, Psychological Torture, The Tethering
I love writing. I love books and words and storytelling and the whole messy world that comes with all of it.
But sometimes…sometimes I feel a little guilty for the damage I do to my characters.
When you get down to the heart of writing, I’m just a person sitting at a computer, torturing innocent, imaginary people.

The level of guilt I feel for torturing my characters varies depending on the series. With Girl of Glass, the world is ending, people are dying in mass, so the damage I did to Nola Kent is like…meh, at least you’re alive.
In How I Magically Messed Up My Life in Four Freakin’ Days there’s tons of drama and magic and danger, but Bryant’s resilient so I feel like he’ll be okay.
The Girl Without Magic gets a little tougher. Maggie Trent is strong and bold, but world hopping adventures are hard. And saving people is a lot of pressure.
The Tethering is rough because Jacob only wants to love Emilia, but it’s not that easy…
But I’m working on a new series, one in which I feel super guilty for the level of pain I’m putting my poor protagonist through.
She’s strong, she’s brave, she’s everything I would want to be if everything I had ever known was destroyed and my fate was to become an assassin. Her name is Ena, and I love her. She may be my favorite character I’ve ever written, but bad things just keep happening.
And I’m the one doing it.
Maybe it’s weird to be so concerned about the damage I’m doing to my imaginary characters. And I can’t make things easier for Ena because that’s just not how her story goes.
But dude…I feel really bad.
And I’m only on the first book in her series.
Oops.
Sorry Ena.
Leave a Comment

Filed under: Hi-Ho the Glamorous Life,What Doesn't Kill You — meganorussell @ 11:30 am
Tags: Blogging, From Actor to Writer, Megan O'Russell, Tens of Thousands of Readers, The Tethering, Writing, YA Fantasy

It is the end of a long and rocky era. The final book in The Tethering series has been published!

The amount of work it took to get The Tethering series from the first scribbles in a notebook to four published books was…painfully monumental.

Though, I will have to say, seeing the charts as The Tethering goes out to thousands of readers definitely makes the tears worthwhile.

When I started writing The Tethering, I was literally writing in a notebook. I was super pleased if I could scrawl out a few pages a day. I would write the scene I wanted to write instead of forcing myself to go in chronological order. I had no idea that head hopping was a thing, let alone a problem. I didn’t know that being an indie author was an option. And I didn’t know if anyone besides my husband and my mother would ever want to read anything I had written.

Now over 60,000 people have downloaded my books.

That is completely insane to me.

I love writing. I love hanging out with my characters and my keyboard. I love being a part of the author community, which is so genuinely supportive it’s a little insane sometimes.

I won’t lie and say it’s all sunshine and roses. The husband and I have had to make a lot of hard choices to fit the massive amount of work my career as an author brings into our lives. I work, like, fourteen hours a day most of the time, and things that I really like to do (like blogging here) have fallen by the wayside.

Building a dream takes a lot of work, and I’m in it for the long haul. From the scribbled notebooks to answering emails from readers, things have changed a lot. But at the heart of it all, and whatever the format may be, I love storytelling. And that is exactly how I have the privilege of spending my time.

Filed under: Hi-Ho the Glamorous Life — meganorussell @ 11:30 am
Tags: #GratefulAuthor, Authors, Books, Curiosity Quills Press, How I Magically Messed Up My Life in Four Freakin' Days, Maggie Trent, Novels, The Girl Without Magic, The Tale of Bryant Adams, The Tethering

I have all the news!

No, literally, so much to talk about.

I have officially signed a six-book contract with Curiosity Quills Press that includes:

Book two in The Tale of Bryant Adams: 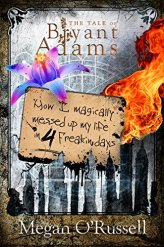 Currently titled Seven Things Not to do When Everyone is Trying to Kill You, scheduled for release in April 2019.

Book two in The Chronicles of Maggie Trent:

Currently titled The Girl Locked With Gold, scheduled for release in December 2019.

Starting in 2020, The Tethering series will be rereleased!

I am so thrilled to have The Tethering going back out into the world, and to continue the adventures of Bryant Adams and Maggie Trent.

A huge thanks to all of you who have read my books and continue to come hang out on Life Beyond Exaggeration. It has been a pleasure to share the madness of being an author with all of you, and I am so excited to continue the journey.

There are a lot of similarities between acting and authoring. The love of storytelling, artistic nature of the endeavor, the constant threat of rejection… and reviews.

Reviews as an actor have never really bothered me. You win some, you lose some, but at the end of the day, you have to do the show the director set to the best of your ability. Altering your performance to fit a review is horribly unprofessional, so you soldier on and keep your chin up.

It’s a little different for books. The book is out there, and there really isn’t anything you can do. Unless there are semi-colons mid-word (as was found in a big name book that will remain nameless), in which case your publisher has to scramble to send a new version out into the world, the book is the book.

But you’re working so independently on your books; you could let the review pressure trickle into your work. Declaring that you’re never going to use a love triangle again, you will avoid writing on all social issues, or banning magic from your books are easy traps to fall into.

I know a lot of authors refuse to read any reviews of their work, and I get it; avoiding psychological damage is important. END_OF_DOCUMENT_TOKEN_TO_BE_REPLACED

J.K. Rowling has finally released the location of the North American School of Witchcraft and Wizardry. Ilvermorny is located on the peak of Mount Greylock. My inner Harry Potter geek is so thrilled to finally know where the American wizards of Rowling’s world study and learn. But the author me is having a minor meltdown.

See, way back at the beginning of The Tethering Series, I knew I wanted to use a real mountain for the lair of the Pendragon, the chief evil dude in the series. After a ton of research, I chose Mount Greylock, spelling it Graylock to match the name of the clan that rules that territory. I even climbed the mountain to make sure the mountain would work well!

After all that research, three years later J.K. Rowling added her wizarding school to the mountain. The Pendragon has new neighbors, and I’ll bet there’s a quidditch pitch.

On the one hand it’s cool that my research and Rowling’s research led us to the same mountain. Great minds think alike and all. On the other hand I’m terrified for what it might mean for the mountain. It’s not exactly a well-known or expertly trailed park. There is a monument right on top, exactly where Ilvermorny is supposed to stand, but other than that there’s not much. I don’t know if the park can handle an influx of eleven-year-olds on September 1st. People are going to get lost in the woods, and parking and peeing will be a nightmare.

On the third awkward hand that nobody likes to talk about, The Tethering Series is now doomed to be called fan fiction. Despite the copyright date inside the book, people will assume that Rowling’s magic moved to Mount Greylock first, and Amazon reviews will start coming calling The Tethering fan fiction. Being the good little author that I am, I won’t be able to respond to tell them to check the copyright date and see that the battle at Graylock with the Pendragon came before Ilvermorny was even a word.

My mom said to just think of it as J.K. Rowling writing fan fiction of my books. She liked The Tethering so much and found the scenes on Mount Graylock so inspiring she had to create a whole wizarding school based on my mountain.

I know that she probably just did the same geographical research that I did, minus the actual climbing of the mountain, and decided it was an amazing spot for magic. But as I am in the midst of a panic attack, that’s what I’ll tell myself. J.K. Rowling just created fan fiction of The Tethering Series.

I have a confession to make. I’m a terrible blogger. I’ve been getting distracted, missing posts, and now I’m going to make excuses for it.

First, I went to Thailand, and here is a beautiful picture by means of apology for that time away.

And then I came back all inspired to work on new books and projects and to a new publishing contract. I have stories that aren’t true buzzing through my head, and they’ve led me away from the stories that are too amazing to need exaggeration.

But I do have good news that is currently giving me a nervous breakdown. I’ve almost finished writing the first draft of the final book in The Tethering series.

Take that in for a second. Almost completely finished writing the fourth and final book in The Tethering series. Close to writing the final words about Jacob Evans and Emilia Gray. Blood has been shed, and loved ones have been buried. Battles are happening, and once they’re over, the books will be, too. There will be no more stories to be written. No more kisses to be stolen. It’ll be done. The characters will either be dead or left to soldier on out of reach of my laptop. END_OF_DOCUMENT_TOKEN_TO_BE_REPLACED

The book review tour has begun! And sweet baby Jesus, it is more stressful than hiking off a mountain to outrun a storm, which I did yesterday.

And the storm won. I got hailed on, fell on my butt, and may have cried a little.

But still, getting four reviews of your book as soon as you wake up in the morning is terrifying.

So far everyone has been really happy with both books in The Tethering Series and has had wonderful things to say.

“The journey they go on felt like a mixture of Harry Potter and Alice in Wonderland, as the adventure is filled with danger and drama and interesting characters they meet along the way.”

So, The Siren’s Realm is like falling down a hole into a world of insanity with nothing but a wand, luck, and love to keep you alive. Actually…a really fair assessment. And I love both books even if the caterpillars freak me out, so I’ll take it! END_OF_DOCUMENT_TOKEN_TO_BE_REPLACED

Next Page »
lifebeyondexaggeration
Blog at WordPress.com.