In traveling for the Wizard of Oz tour, we get to go to some really great places and some places that…aren’t on the radar for must-visit destinations.

Recently, we visited Detroit. The only things I knew about Detroit were that cars got made there and that the economic slumps hit it very hard. While both those things are true, nobody ever mentioned how awesome Detroit is!

The husband and I wandered out of our hotel, just looking to stretch our legs, and we found a huge amount of outdoor art that led us to a Christmas wonderland! 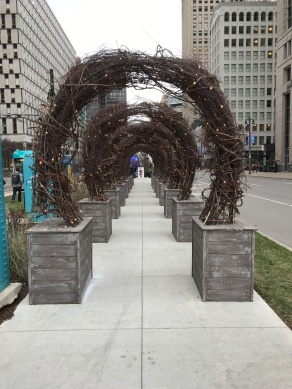 They had blow-up igloos with table tennis and hot chocolate, a tent decked out to be a ski lodge, and an ice skating under a giant Christmas tree!

So what did these wise actors do on their precious day off? We went ice skating!

Granted, strapping blades to your feet and hoping you don’t die on a slippery surface isn’t really the best plan when you need your knees to do your job. Even the security guard warned us that he would jump out of a plane before he would consider ice skating. He claimed it was due to his risky youth, which resulted in copious medical bills and hiding from his father the fact that he had no skin left on the side of his right thigh. Really, I just think there’s something utterly counter intuitive in making the surface area of your feet smaller and then stepping onto a surface that you know will readily land you on your ass under the best of circumstances.

But hey, you’ve got to live, right?

After playing to over 10,000 folks in three performances at the amazing Fox Theatre, exploring Detroit was an awesome adventure. I’d highly recommend giving Motor City a visit.

One Response to “Decorated Detroit”